‘What a shaker’: LA is hit by 4.2 magnitude earthquake off the coast of Malibu-Freshnews4u 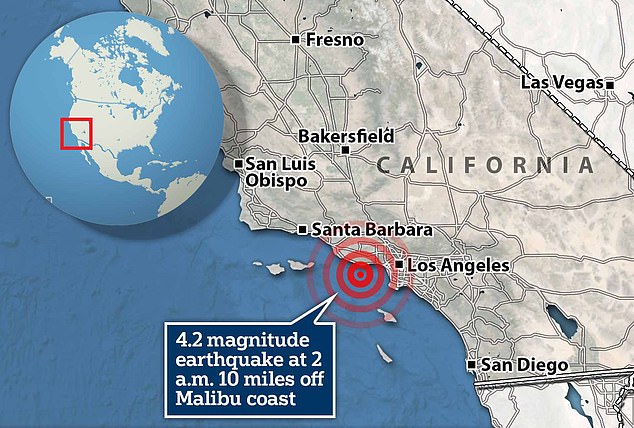 Los Angeles was hit by a 4.2 magnitude earthquake off the coast of Malibu on Wednesday morning.

Residents said they were awoken by the quake, with one saying that it felt ‘like a train going by’ in a post on Twitter. ‘That was a shaker!’ another wrote.

Alerts said the earthquake struck almost on the dot of 2 a.m. on Wednesday, 28 miles south-west of Los Angeles and about 10 miles south off the coast of Malibu.

There were at least four aftershocks of decreasing intensity, the United States Geological Survey reported. According to the National Weather Service, the quake struck at a depth of nine miles, and no tsunami warning was issued.

Today’s earthquake comes a month after a fatal earthquake shook the north coast of California in late December.

A resident of Canoga Park said on Twitter they felt the earthquake, as well as aftershocks. Another said they felt it in Agoura Hills.

Several celebrities also reported that they felt the shake. ‘Wow. That was big,’ actor Josh Gad wrote at 2:02 a.m., moments after the quake.

There were no immediate reports of damage in the region, or of any injuries.

California and Nevada are hit with an average of 25 earthquakes every year with magnitudes between 4.0 and 5.0, according to the Los Angeles Times. 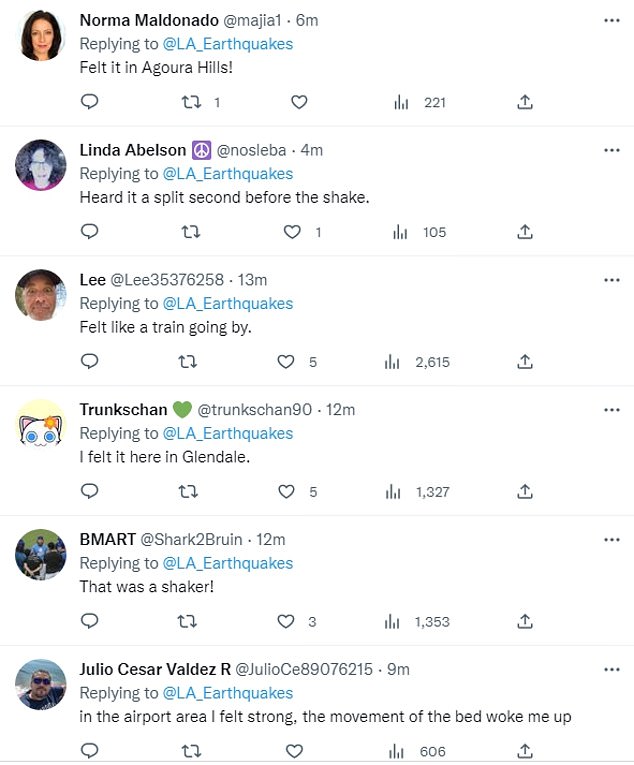 Residents said they were awoken by the quake, with one saying that it felt ‘like a train going by’ in a post on Twitter . ‘That was a shaker!’ another wrote

The Los Angeles Fire Department confirmed this morning that they would enter ‘earthquake mode’.

The LAFD said in a statement: ‘All 106 neighborhood fire stations will conduct a strategic survey of their districts, examining all major areas of concern (transportation infrastructures, large places of assemblages, apartment buildings, power-lines, etc).’

The statement said a survey will be conducted from the ground, sea, and air. Once the report is complete, the fire department will come out of ‘earthquake mode’, assuming no major damage.

‘There are currently no initial reports of structural damage or injuries. An update will be provided once earthquake mode is complete,’ the statement added.

This comes after two people died and more than a dozen were injured as a 6.4 earthquake rattled northern California last month.

The earthquake rocked the stretch of rural area around Ferndale on the state’s north coast in the early hours of the morning on December 20, 2022.

There were some 80 aftershocks that rattled through surrounding areas, knocking homes off their foundations.

WHY DOES CALIFORNIA SEE SO MANY EARTHQUAKES?

An average of 25 earthquakes with magnitudes between 4.0 and 5.0 occur every year in California and Nevada, according to the Los Angeles Times.

Earthquakes are a common occurrence in the west of the United States due to the tectonic plates that lie underneath it.

Tectonic plates are moving slabs that make up the outer layer of our planet and behave like conveyor belts in the way they carry and drag continents around on the surface.

Earthquakes typically occur at the boundaries of tectonic plates, where one plate dips below another, thrusts another upward or where plate edges scrape alongside each other.

The area where two tectonic plates meet is called a fault, and California lies on top of the San Andreas Fault.

It extends about 800 miles (1,300 km) through the United States, from the north of the Gulf of California through western California, before passing through the Pacific Ocean towards San Francisco. 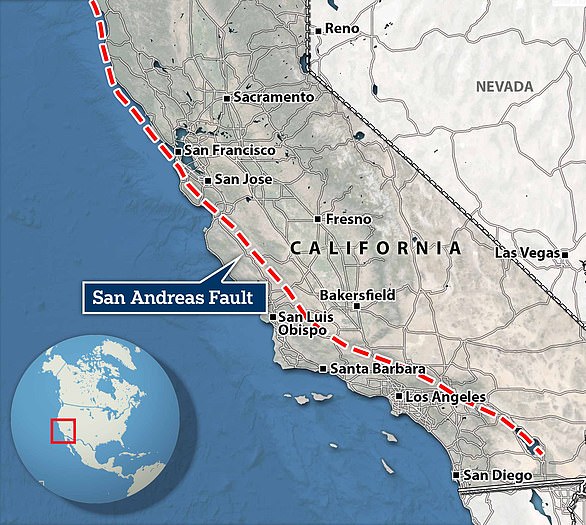 The area where two tectonic plates meet is called a fault, and California lies on top of the San Andreas Fault

The fault was formed about 30 million years ago when the North American Plate engulfed most of the Farallon plate, resulting in its contact with the Pacific Plate.

Nowadays, the Pacific plate is sliding laterally past the North American plate in a northerly direction by about 1.6 to 2.4 inches (4 to 6 cm) per year.

This makes it susceptible to tectonic activity, which is felt primarily by the California cities closest to the San Andreas Fault.

The fault is split into three segments, that are each prone to different types of movement and degrees of earthquake risk.

The southernmost segment has the highest risk because it is bent most to the west, making it difficult for the Pacific Plate to slide along northwards.