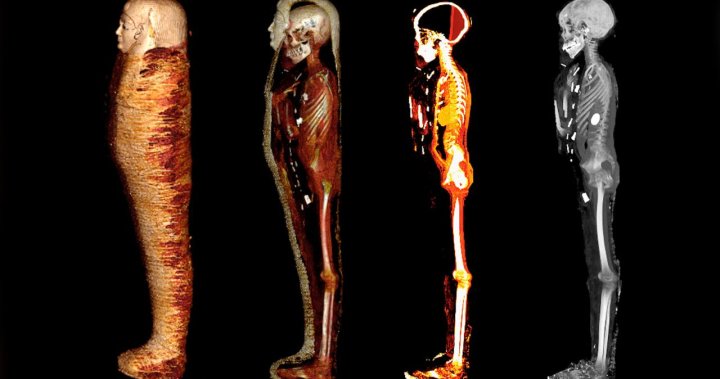 Radiologists in Egypt have digitally “unwrapped” the remains of a mummified teenage boy that’s been stored in a Cairo museum for over a century, revealing a multitude of a plants, amulets and even a mask adorning his body.

The boy was mummified after his death 2,300 years ago. His remains were first discovered in 1916 in a cemetery in Southern Egypt, which was used between approximately 332 BCE and 30 BCE. His excavated remains were moved to the Egyptian Museum in Cairo, where they had remained in the basement, unexamined.

Earth’s core might now be spinning in the opposite direction, study finds

However, a team recently decided to take a closer look at the remains of the teen, who they have nicknamed “Golden Boy.”

Using computerized tomography (CT) scans, they were able to digitally unwrap the remains without physically disturbing them — a method that has come into favour in recent years, rather than destroying the wrappings.

What they found, as detailed in the journal Frontiers in Medicine, was a body decorated with the trappings of wealth and protection.

The remains were stored inside two nested coffins, the outer coffin being quite plain while the inner wood sarcophagus was decorated with patterns and a gilded face.

The CT scan also identified 49 amulets inside the mummy and between the wrappings, arranged in three columns. The amulets featured 21 different shapes and the scan indicated that at least 60 per cent were made of metal, most likely gold.

He was also wearing a gilded head mask inlaid with stones and a protective covering called a cartonnage across his torso.

Sahar Saleem, a radiologist at Cairo University and first author on the paper, noted that the boy’s adornments are in line with some of the rituals outlined in the Egyptian Book of the Dead, including a pair of white sandals found on his feet and ferns wreathed around his body.

“The sandals were probably meant to enable the boy to walk out of the coffin. According to the ancient Egyptians’ ritual Book of The Dead, the deceased had to wear white sandals to be pious and clean before reciting its verses,” Saleem said in a statement.

“The heart scarab is mentioned in chapter 30 of the Book of the Dead: it was important in the afterlife during judging the deceased and weighing of the heart against the feather of the goddess Maat,” Saleem continued about the team’s findings. “The heart scarab silenced the heart on Judgement Day, so as not to bear witness against the deceased. It was placed inside the torso cavity during mummification to substitute for the heart if the body was ever deprived of this organ.”

Researchers place Golden Boy’s age at 14 or 15 years old. In their paper, they say that all of the boy’s organs had been removed, with the exception of his heart, and that his brain had been replaced by resin.


They also found that they boy had excellent dental hygiene and was likely of high socioeconomic status given the quality and presentation of his mummification. Although no signs of illness were evident from the CT scan, and a cause of death can’t be determined, there was nothing to suggest an unnatural death.

According to the researchers, the study of ancient Egyptian mummies offer the chance to learn more about ancient human health, beliefs and skills.

Earth’s core might now be spinning in the opposite direction, study finds

Golden Boy has now been moved from the basement of the Egyptian Museum to its main exhibition hall, where a display will feature CT images and a copy of the heart scarab.

In 2021, Saleem and her colleagues digitally unwrapped the mummy of Amenhotep I and are responsible for discovering a knife wound in the throat of Ramesses III as well as a missing toe, suggesting he was murdered by a band of assassins.