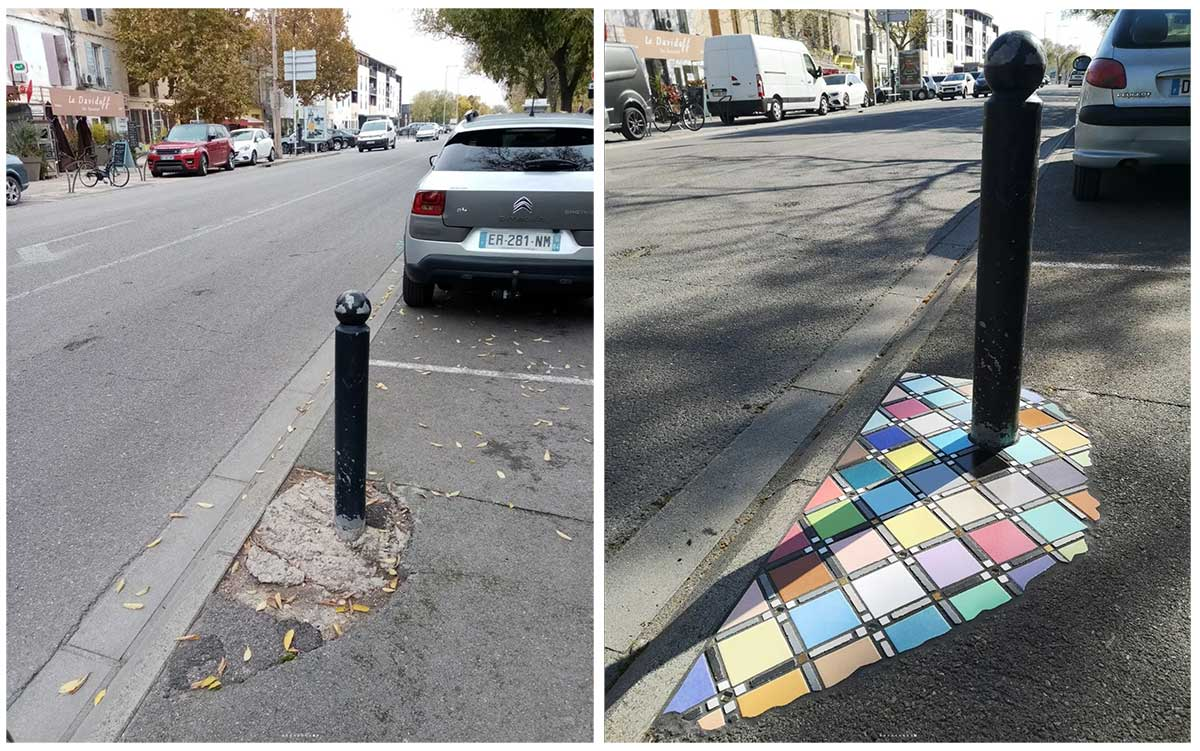 Walking past a colourful street art or an art installation is a sight for sore eyes.

Art that stands out from the monotonous nature of the rest of the scene often brings joy to the viewers. This Lyon-based anonymous artist is doing just that in the streets of Europe.

Em Emem is a Lyon-based street artist who remains anonymous. His street name is Em Emem and he is renowned world-wide for his art. He is called the bitumen mender, who also repairs any holes in the sidewalks, beautifies storm drain covers with his mosaic of tiles.

The street artist has been active since 2016, and has been decorating several imperfections in a city life bringing a new meaning to restoration. He has invented this urban art and calls it “flaking”. This comes from the French word flaque, which means puddle or a patch.

RELATED: Slogans Meant to Spread Hate – How One Street Artist Uses Them to Bring People Together

He has worked on cracked city walls, uneven potholes on weared city roads flaking them with his colours and patterns. The old alley that he once worked in, later moved and “hypnotised” him into taking up this art. That alley housed his first workshop, also becoming his first canvas.

“One day, I patched up the entrance to the driveway leading at my workshop…I made her little cloured bandages with ceramic scraps at my disposal,” said Ememem in an interview with Brainto.

The child in us rejoices looking at color.

Hand a kid a colourful item or mend a wound with a colourful bandaid, have the same charm. Em Emem just made this larger for all the structural wounds in the city. The vibrant repairs started with his home in Lyon, later spreading to the streets of Paris, Norway, Scotland, Germany, Italy, and so on.

“A huge pothole greeted me every morning. So before wallowing in it, I one day grabbed a trowel and set about making him a custom bandage,” narrated Ememem. “A high-fashion coat grafted onto the asphalt. The first ‘flack’ was born and Ememem with it. Suddenly, I understood that I was going to spend the rest of my life doing another one, and then another, and another”…

He was a visual artist before becoming the pavement surgeon working with Mosaics, ceramics and designs. One unexpected wound and this man became a poet, with a drive to heal and revive many such scars.

This article in 2018 protected his anonymity yet made his art rise to fame. The reporter rightly wrote: “A pothole disappears, tiles instead, a nice day. Thanks to Ememem, how many of the people of Lyon have found that life isn’t so disgusting after all?”.