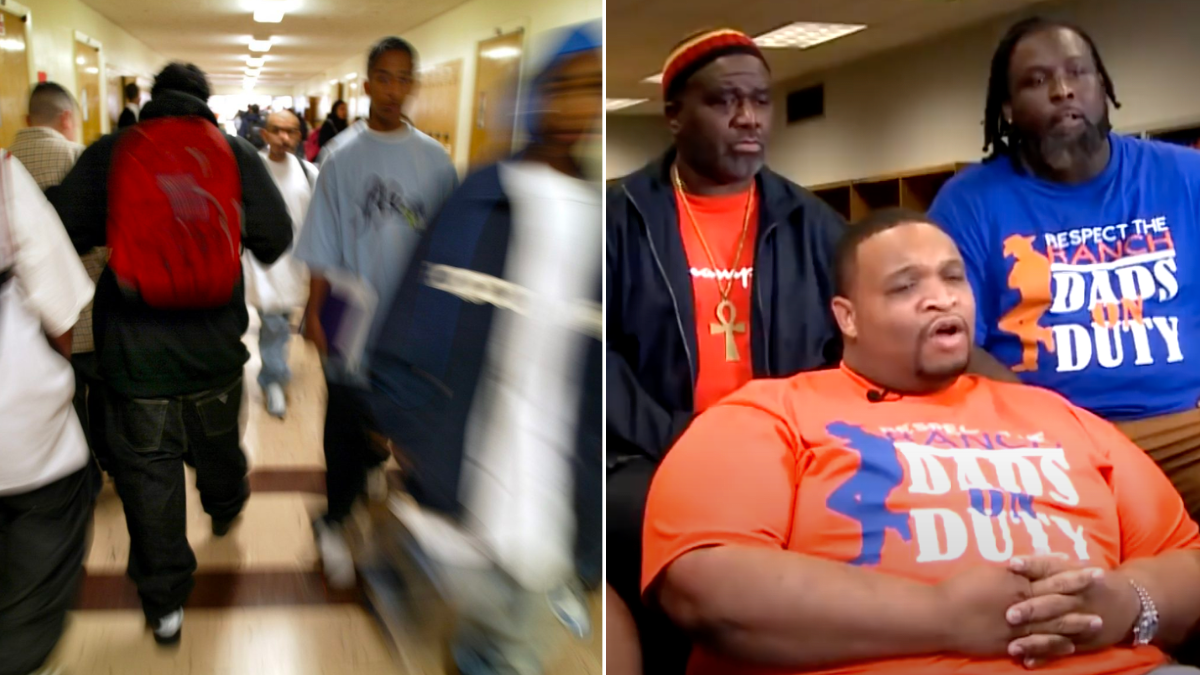 “This isn’t the school that we sent our children to. This isn’t the community that we’re raising our babies in,” Michael LaFitte thought as violence erupted at Southwood High School in Shreveport, Louisiana.

In just two days, shortly after the start of the school year, 23 students were arrested. One had threatened a resource officer and a staff member; another was charged with battery for hitting an assistant principal. Things were spiralling out of control.

LaFitte’s daughter is a student at Southwood, but it was a friend of his that gave him a call, expressing concern about the increase in gang violence at the school. That friend had heard about it from a school administrator. It wasn’t the Southwood High that he remembered. LaFitte agreed.

So the dad called up four other dads from the school, and they met up to talk about the situation. “After about three hours,” LaFitte said, “we came up with the idea to have us be a presence on the campus…We thought we could be a collective unit to be able to show them [the students] that there are strong men who are on the campus.”

And so the idea for “Dads on Duty” was born. Over the weekend, an emergency meeting was held for parents and school staff. It was at this meeting that the dads stood up and said they would like to help. Who better than fathers to take care of their kids? They started the very next day.

But the dads are not just there to lay down the law. “It’s our goal to let them see what the right relationship with a male figure is supposed to look like,” LaFitte said.

And so the Dads on Duty, in their matching black-and-white shirts, encourage and support the students at Southwood. They want the kids to know that they’re primarily there to make sure students have a safe place to learn. The dads are obviously invested in the kids’ success. They spend most of their time just talking to the kids—and yes, telling dad jokes—to form bonds.

They’re also not all dads. What started as five dads is now a 40-men team organized into six-person shifts. Some are dads, but others are uncles, grandfathers, brothers, and even men whose kids have already graduated but who just want to show their support for their community. “They interact with all the kids like we’re their own children,” one student said.

And their friendly but firm approach works: the gangs have all but dissipated into thin air, and acts of violence are now rare.

“The school has been happy. You can feel it,” said one student.

“We stopped fighting and people started going to class,” said another.

A Much Greater Solution Than Constant Policing

Dr. Kim H. Pendeleton, the school principal, agreed. “After the fights, there was a heavy police presence at the school and the kids told me they did not like that. The dads are from the community. They care, and they’re committed to being present.”

Most of the Dads on Duty work, so covering the three shifts a day is quite the balancing act. They also attend extracurricular activities and sporting events. “Some days we have long, long days, but we will be at school no matter what,” said Zachary Johnson, a Dad on Duty with four kids at Southwood. “When your heart is into whatever you’re doing, you make it work.”

“Just to be here makes a big difference,” another dad added.

Shreveport, like many cities across the country, has seen a rise in school violence. Nearly all schools have a bullying and intimidation policy, and most high schools have a police officer on duty. But few have Dads on Duty. Shreveport’s mayor Adrian Perkins wants to change that. After witnessing the group’s effectiveness at Southwood High School, Perkins said he’d like to see Dads on Duty implemented in every school in the city. He went so far as to declare October 26 “Dads on Duty Day”.

“It’s so effective because they have tapped into something that’s so fundamental and basic: that is parenting,” said Perkins.

Indeed, being an involved parent seems to be the most important message here. These dads saw a problem with the environment their kids were growing up in. They organized themselves and took action. They participated in their community, to the benefit of all the children in it. They were able to turn a desperate situation on its head.

“We are armed with love,” LaFitte said.

Because of their example, other Dads on Duty groups have sprung up across the nation, from Nevada to Mississippi. They’ve communicated a powerful message to the world: By giving of your time and attention, you can make the world a better place.