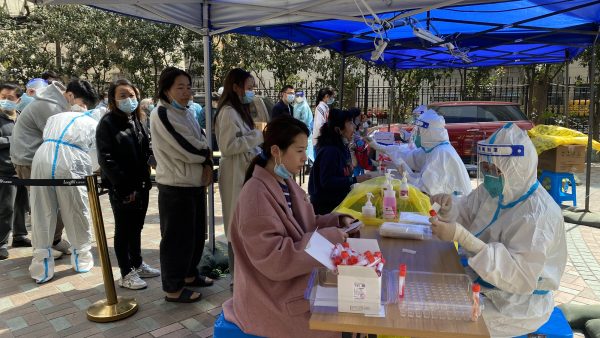 More Chinese cities eased anti-virus restrictions and police patrolled their streets Thursday as the government tried to defuse public anger over some of the world’s most stringent COVID measures and head off more protests.

Following weekend demonstrations at which some crowds made the politically explosive demand that leader Xi Jinping resign, the streets of major cities have been quiet in the face of a crackdown that has been largely out of sight.

Guangzhou in the south, Shijiazhuang in the north, Chengdu in the southwest, and other major cities announced they were easing testing requirements and controls on movement. In some areas, markets and bus service reopened. A newspaper reported Beijing, the capital, has begun allowing some people with the virus to isolate at home, avoiding crowded quarantine centers that have prompted complaints. The government didn’t immediately respond to a request for confirmation.

But many of the rules that brought people into the streets of Shanghai, Beijing, and at least six other cities remain in force. The death of former leader Jiang Zemin this week could provide another opportunity for crowds to gather and potentially protest.

The announcements easing restrictions didn’t mention last weekend’s protests of the human cost of anti-virus measures that confine millions of people to their homes. But the timing and publicity suggested Xi’s government was trying to mollify public anger.

While experts say Beijing’s policies are unsustainable, they warn it can’t relax controls that keep most travelers out of China until tens of millions of older people are vaccinated. They say that means “zero COVID” might stay in place for as much as another year. Government health officials have begun stressing the need to push ahead with the vaccination campaign, especially among the elderly, a step that analysts have long pegged as a necessary precursor to reopening.

Meanwhile, Vice Premier Sun Chunlan, the public face of China’s COVID-19 response, stressed the “weakened,” less deadly nature of the Omicron strain of the virus in a meeting at the National Health Commission on Wednesday. That, among other factors, means China’s pandemic measures are entering “a new stage,” Sun said. Many took her remark as confirmation that the country will continue to relax restrictions.

With a heavy police presence, there was no indication of protests Thursday. Notes on social media complained people were being stopped at random for police to check smartphones, possibly looking for prohibited apps such as Twitter, in what they said was a violation of China’s Constitution.

“I am especially afraid of becoming the ‘Xinjiang model’ and being searched on the excuse of walking around,” said a posting signed Qi Xiaojin on the popular Sina Weibo platform, referring to the northwestern region where Uyghur and other Muslim minorities are under intense surveillance.

Protesters have publicized protests on Twitter and other foreign social media that the Communist Party tries to block access to, while videos and photos are deleted from services within China. But police appeared to be trying to keep their crackdown out of sight, possibly to avoid encouraging others by drawing attention to the scale of the protests.

On Thursday, the government reported 36,061 new coronavirus cases in the past 24 hours, including 31,911 without symptoms.

The industrial centers of Shenyang and Harbin in the northeast announced that students who attend school online and other people who have minimal interaction with others would no longer be required to take virus tests that have been administered as often as once a day.

In Beijing, some neighborhoods have begun allowing people with mild or asymptomatic COVID-19 cases to isolate at home, the newspaper Yicai reported on its website. The anti-epidemic agency didn’t respond to questions sent to its office by fax.

The report gave no details, but a post on the social media account of the district government of Gaobeidian on Thursday said people there who test positive can stay at home. It was later deleted.

Meanwhile, state TV announced the funeral for Jiang, who was ruling party leader until 2002 and president until the following year, will be held Tuesday at the Great Hall of the People, the seat of China’s ceremonial legislature in central Beijing. Jiang died Wednesday at 96.

No foreign dignitaries will be invited in line with Chinese tradition, the party announced. It said there would be no “body farewell ceremony,” possibly due to anti-virus controls.

Washington is watching the “very heavy security” in Beijing and other cities with “great care and great attention,” Ambassador Nicholas Burns said in an online appearance to an audience in Chicago. He gave no indication the Biden administration was taking any action.

“Facts have proven that China’s epidemic response measures are science-based, correct and effective,” said a ministry spokesman, Zhao Lijian. Noting the U.S. death toll, he said the country “is in no position to point fingers at China’s COVID response.”

Xi’s government has promised to reduce the disruption of its “zero COVID” strategy by shortening quarantines and making other changes. But it says it will stick to restrictions that have repeatedly shut down schools and businesses and suspended access to neighborhoods.

Protests of the rules began Friday after at least 10 people were killed in a fire in an apartment building in Urumqi in Xinjiang. That prompted questions about whether firefighters or victims trying to escape were blocked by locked doors or other controls. Authorities denied that, but the deaths became a focus for public frustration.

The government says it is making restrictions more targeted and flexible, but a spike in infections since October has prompted local officials – who are threatened with the loss of their jobs if an outbreak occurs – to impose controls that some residents say are excessive and destructive.