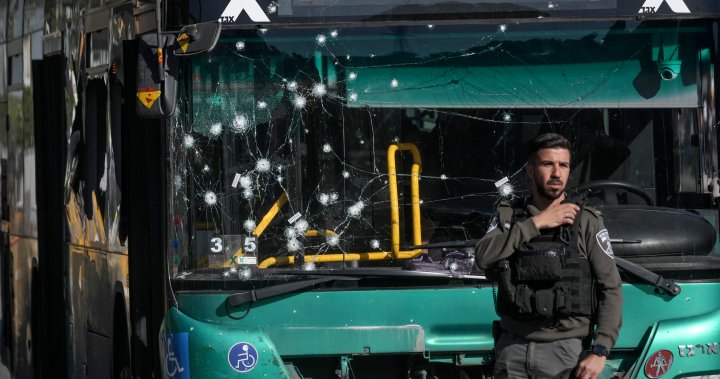 Prime Minister Justin Trudeau condemned a “terrorist attack” in Jerusalem on Wednesday after a young Canadian was killed in a series of explosions.

Two blasts went off near bus stops in the city at the height of morning rush hour, killing the Canadian and injuring at least 18. The first explosion happened at a bus stop on the edge of Jerusalem, while the second went off about a half-hour later in Ramot, a settlement in the city’s north.

The Associated Press reported that the victim was identified as Aryeh Shechopek, a Canadian-Israeli teenager who was heading to a Jewish seminary when the blast went off. Canada’s ambassador to Israel, Lisa Stadelbauer, also confirmed the death on Twitter. There were conflicting reports over Shechopek’s exact age.

Heartbroken to confirm that a young Canadian lost his life in this morning’s reprehensible terror attack in Jerusalem. Our sincere condolences to his family and friends, and to others wounded in this attack. Canada continues to condemn all forms of terror.

“Incredibly saddened to learn about the death of a young Canadian in the terrorist attack in Jerusalem. I’m sending his family and friends my deepest condolences,” Trudeau said in a tweet Wednesday morning.

“I’m also thinking of those who were injured. Canada condemns this violence in the strongest possible terms.”

Incredibly saddened to learn about the death of a young Canadian in the terrorist attack in Jerusalem. I’m sending his family and friends my deepest condolences. I’m also thinking of those who were injured. Canada condemns this violence in the strongest possible terms.

The White House also condemned the blast on Wednesday, saying it has offered all “appropriate assistance” to the Israeli government as it investigates the incident.

“We mourn the reported loss of life and wish a speedy recovery to the injured. The United States stands with the Government and people of Israel,” White House press secretary Karine Jean-Pierre said in a statement.

Tensions between Israelis and Palestinians have been surging for months. Israel has been conducting night raids in the occupied West Bank that were prompted by a series of attacks against Israelis that killed 19 people in the spring. In recent weeks, there has been an uptick in Palestinian attacks, AP reported.

— with files from The Associated Press and Reuters.