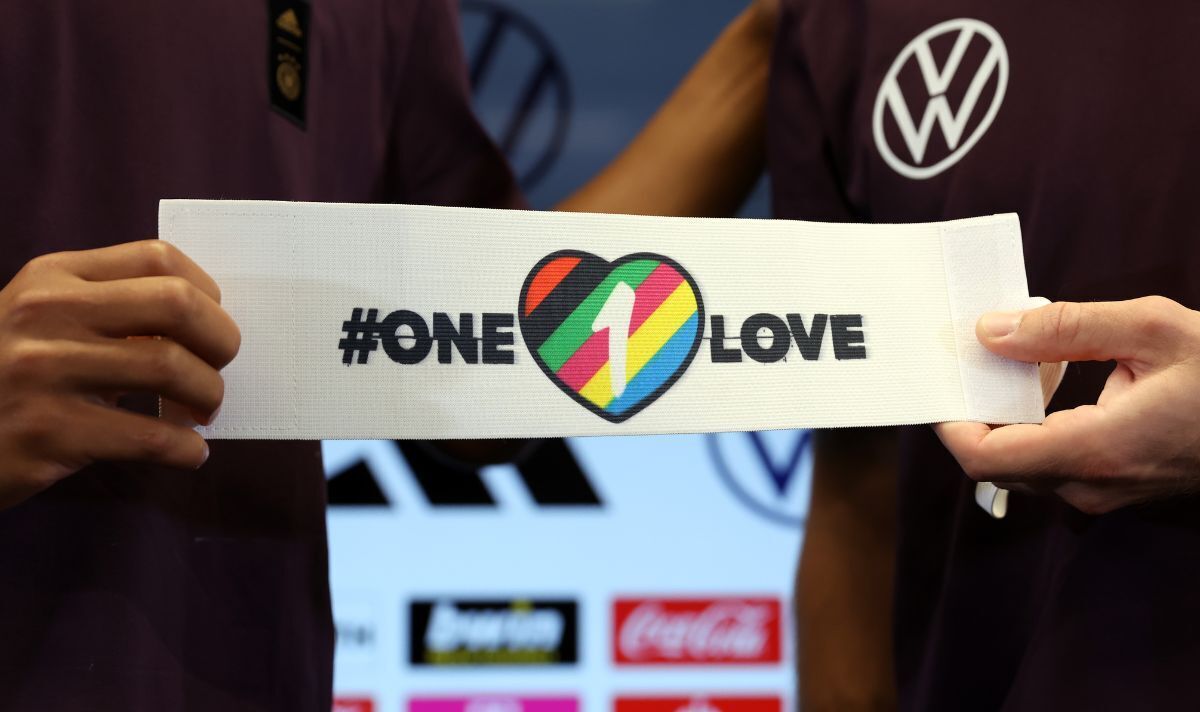 It comes after the German supermarket group REWE ended its sponsorship deal with the DFB. The supermarket came to the decision after the DFB refused to let football players wear the OneLove armband at the World Cup in Qatar.

FIFA threatened to issue any player with yellow cards for wearing the rainbow armband which was introduced to support inclusion and diversity.

In September, the captains of ten European nations, which include, England, Wales, Belgium, Denmark, France, Germany, Norway, Sweden, Switzerland and the Netherlands, would wear the OneLove armband in a show of support for LGBTQ+ rights.

DFB spokesman Stefan Simon told the German tabloid newspaper Bild that the DFB has lodged a case over the legal validity of the ban by FIFA.

He said: “FIFA has forbidden us from using a symbol of diversity and human rights.

“It said the ban would be linked to massive penalties [in the nature of] sporting sanctions without concretising exactly what it meant.

“The DFB is keen to clarify whether Fifa’s procedure is in fact legitimate.”

Me Simon added that the DFB hoped to overturn the ban on the OneLove armband by Germany’s match against Spain this Sunday.

In October, REWE had already informed the DFB that their partnership would not be continued, but now their sponsorship has been terminated immediately.

The Cologne-based retail brand said in a statement before the DFB had announced its legal action that it wanted to distance itself from the position taken by FIFA and its president Gianni Infantino.

The CEO of the supermarket chain REWE, Lionel Souque, said: “We stand for diversity and football too is about diversity.

“The scandalous position of FIFA is for me as CEO of a diverse enterprise, and as a football fan, absolutely unacceptable.”

However, Mr Souque added that the supermarket wished the German football team well at the World Cup and said: “We’re on your side and are rooting for you.”

In a bizarre statement, Mr Infantino started by saying: “Today I have strong feelings. Today I feel Qatari, I feel Arab, I feel African, I feel gay, I feel disabled, I feel a migrant worker.”

He continued: “We have been taught many lessons from Europeans and the Western world. I am European. For what we have been doing for 3,000 years around the world, we should be apologising for the next 3,000 years before giving moral lessons.”

Reports from the World Cup have emerged surrounding the deaths of migrant workers in Qatar as well as the treatment of LGBTQ+ people, as same-sex relationships are criminalised in the country.

In 2021, the Guardian reported that 6,500 migrant workers from India, Pakistan, Nepal, Bangladesh and Sri Lanka have died since Qatar was announced as the World Cup host.

In Germany, certain pubs and bars are refusing to broadcast the World Cup while others have announced they will donate their alcohol profits to migrant worker charities.

Surveys have suggested more than half of Germans are in favour of sponsors, fans and politicians boycotting the World Cup.

The majority have also stated they will not be watching any football matches, at a time Germnay’s public broadcaster paid €200m for the right to broadcast the World Cup.

Germany’s interior minister, Nancy Faeser said the banning of the OneLove armband was a mistake by FIFA.

She said: “It breaks the heart of every fan to see how Fifa is also putting the burden of this on to the shoulders of the players.”

The president of the DFB, Bernd Neuendorf, also stated: “In my opinion, this is something of a display of power by Fifa. We see this as more than frustrating as well as being an unprecedented event in the history of the World Cup.”